It was Fiona’s birthday, but it wasn’t a day she wanted to celebrate.  Today she finally becomes and adult.  It breaks her heart that Zayne didn’t get to be here to help her transition into a woman.  Just last week she lost her father Zayne and her uncle Brenton.  Its been a rough week with having to help Robyn with her homework.  She’s been acting out towards her since all this has happened. She’s been causing trouble in school and child services has already stopped by and warned her that if Robyn doesn’t start to bring her grades up and that this apartment doesn’t get fit for a child she will be put into foster care.  Fiona can’t allow that to happen.  She knows she’s not the best house keeper.  She’s not really a house keeper anything for that matter.  Cleaning is gross, it smells bad, its hard on her nails and she just can’t have it.  She was able to talk with Ellie and explained that if something isn’t done she was going to lose Robyn.

Ellie knew that Fiona needed to grow up.  She’s always been treated like a princess by Zayne.  Never was told to do anything.  Ellie knew she shouldn’t help out but at the same time she just couldn’t help herself.  She never had children of her own and she loved those girls as if they were her very own.  She went up to their apartment and started getting the apartment cleaned up.  She also saw that one of the toilets was leaking.  She helped Brenton often with their toilet so she knew it was the wax ring that needed replacing.  She was able to get the toilet fixed.

“I’ll come up each week to help get the place straightened out in hopes that Robyn doesn’t get taken away.” Seeing those girls always helped lift Ellie’s spirits but it didn’t help heal that hole in her heart.  She still aches for Brenton and cries herself to sleep each night.

Fiona asked if Ellie could bake her cake for her birthday today.   Ellie was such a good chief after all.  Ellie came up that evening and started getting the cake ready.  Fiona was in her room trying to pick out the best outfit, do her hair and makeup.  She knew Ellie would have her camera, she’s always snapping pictures.

It was time for cake and ice cream.  Fiona noticed Ellie didn’t bring her camera.  She also noticed tonight that she just hasn’t seemed very chipper like she usually is.  Unfortunately Fiona is to self centered to realize why Ellie hasn’t been herself.

“Did you bring your camera Aunt Ellie?”

“Huh? What?  Oh, no I didn’t.  I forgot.”  Ellie really wasn’t feeling it to take pictures but she also knew she should.  Zayne’s camera was on the counter where it normally was.  He was always getting the girls picture taken while the grew up.  She picked it up and said “Cheese!”

Here’s the one photo Ellie took of Fiona: 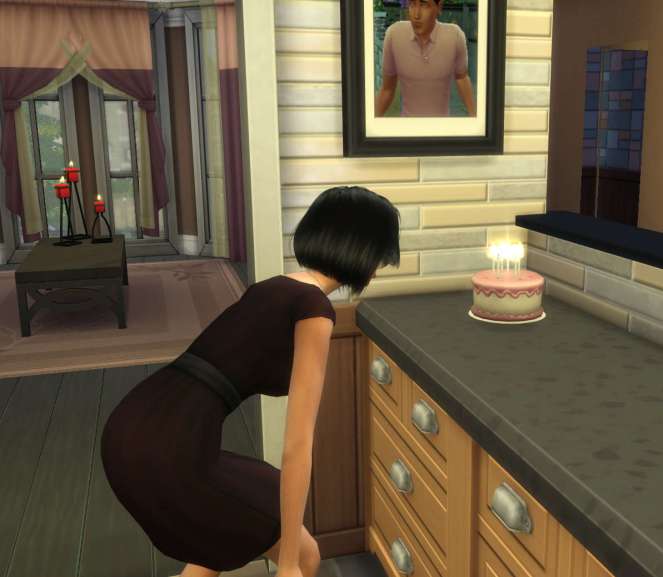 Robyn also had a birthday in a few days so Ellie went ahead and lit the candles a second time for her to also blow out.  She took a picture of her as well:

Now that Robyn is a teenager, social services probably won’t be stopping by anymore.  After cake and ice cream, Ellie headed home.  She was so tired anymore.  She’s having a hard time getting up in the mornings and hasn’t left the house since Brenton passed.

That night Ellie got up about 3a.m.  She had severe heartburn.  She went upstairs and took a chewable and drank some milk to help sooth her heartburn, but it wasn’t going away.  She hasn’t been feeling well lately.  Felt like she was coming down with the flu. She lost feeling in her left hand and dropped her glass and it shattered when it hit the corner of the counter.  Her chest felt so tight, the weight of elephants pressing down on her.  She could hardly breathe.  She felt like she was going to vomit so she laid down on the floor in hopes that it would go away on its own.  The room went dark.

Ellie had a heart attack.  Family members believe she died from a broken heart and that she just couldn’t take it living there with out Brenton.  She is now with him and can spend eternity beside her soulmate. 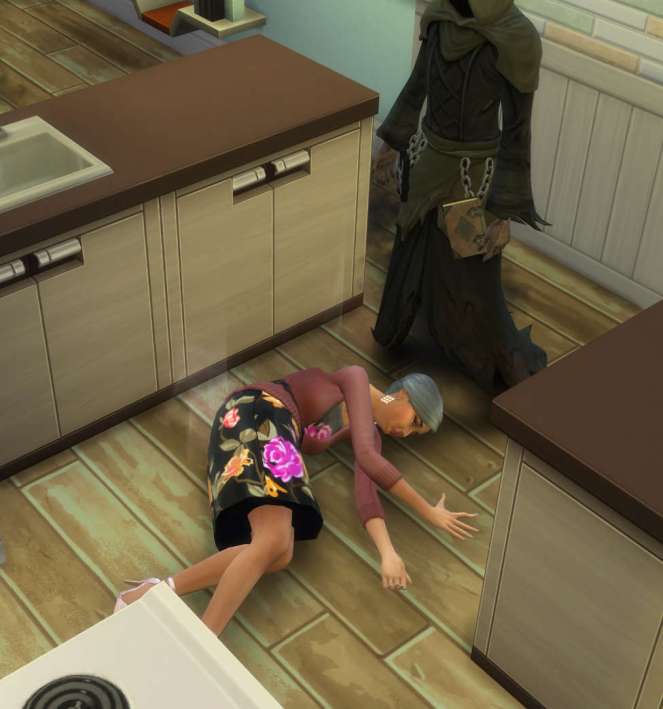 Fiona and Robyn are now on their own.  Where will their new lives take them?  Will Robyn straighten up and graduate?  Will Fiona take the time to stop thinking about herself long enough to think about others?  Continue reading to find out!

One thought on “Sims 4: I’m a Lover Challenge Gen 4 ~ A new beginning”