New Years Eve was in a few days now and Annalise hasn’t spoken to Lawson since.  She thought she was clear in letting him know she was interested in him by the way she stroked his cheek on Christmas.  There wasn’t many words passed between them after that, he had smiled a little but then walked away.  She had just stood there and watched him leave hoping he would turn back and queue her to go with him, but he didn’t.  He just kept walking.

Annalise has sent Lawson a few texts since Christmas and has invited him over for New Years but she hasn’t heard any reply.

“Is Lawson coming over for New Years?” Annalise heard her mom through her thoughts.

“What?  I mean, I’m not sure.  I sent him a few texts inviting him over but haven’t heard back from him yet.”
Fiona wasn’t surprised.  He’s a college boy, I’m sure he’s got other plans for the evening. Why would he want to spend it here, “I’m sure if he could he will be here.” she responded back with a smile, hoping that Annalise didn’t see that she didn’t believe what she had said.

“Yea, I guess so……” Annalise’s voice trailed off as she looked out the window at the glistening snow.

New Years Eve has come and Fiona is in the kitchen getting the snacks around for the evening.  Planning finger food for the night that way they can just munch on what ever they wanted and use the paper plates so there isn’t much in the way of clean up to be done in the morning.  Annalise was in her room with the door shut.  She had been there most of the day.  Fiona knew she was upset.  She could see it in her eyes that she really liked Lawson even though herself wasn’t to thrilled about him.  Who does he think he is making my child like him?  She’s still a minor and he’s an adult!  He needs to find someone his own age.  Maybe this is good he isn’t here.  She will see, he’s only out for one thing and since he’s not going to get it from her he will just disappear.

Fiona jumped when she heard the buzzer.  She was deep in her own thought not realizing the time when the buzzer for the townhouse went off.  She answered the buzzer and when she heard who it was, she desperately wanted to tell him to go home.  That Annalise wasn’t interested in him and that he should look else where for what he wants.  As she was thinking those words she heard her mouth say “Sure come on up!”

When Lawson came inside, “she’s in her room. I will go get her.”  she said as she turned to get Annalise.

When she opened the door she could see the sadness in her face as she sat by her window looking outside.  “There’s someone here to see you.”

The moment Annalise heard her mom, joy came to her eyes as a smile swept across her face.  She quickly got up, but didn’t run, past her mom in hopes who she thought was there was truly there.

“You made it!  I didn’t think you were going to show since you never answered my texts.”

“I’m sorry.  My brothers found my phone and saw that I was talking to you and all immediately I was teased with ‘Is she a real girl?  Did you make her up?’ claiming that no real girl would ever talk to me.  Next thing I knew my phone was missing.  I still haven’t found it.”

Annalise didn’t care what had happened she was just glad he was there.  First thing she did was hug him.  She never wanted to let him go again.

Before Annalise knew what happened, she was pulled over and Lawson was giving her a kiss on her temple.  Her knees felt like they were going to give out! 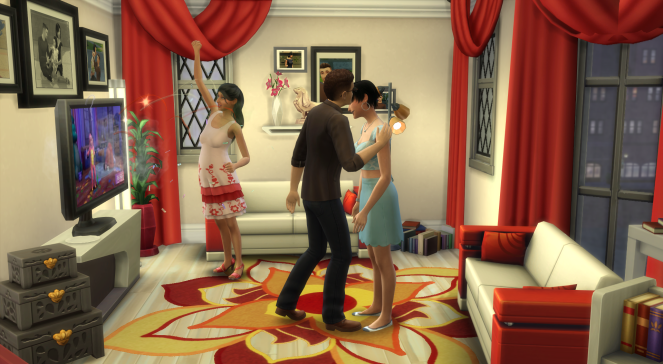 When it was time for Lawson to leave, Annalise walked with him outside.  They took a short walk down the street looking up at the stars.  Smelling the crisp wintry night air when suddenly Lawson stopped, he turned to face Annalise.  She was a little unsure on what was going on.   He took her hand in his, leaned down and kissed it, while doing so he said, “Would you like to go steady with me?”

It took all of Annalise not to jump up and down with joy.  She pulled herself together just long enough to say “YES!”  but that was all the longer she could hold herself.  She grabbed and gave him their first kiss!

How is Fiona going to take Lawson dating her daughter? Will Annalise keep the romance a  secret?

Keep reading to find out!